Model Railway in a Box – Part 1

One of the problems that affect us at home and our love for this hobby is lack of space. Modern homes just don’t have enough room for a family to give up a spare room to become a  model railway.

My Son and I, therefore, decided to make a micro layout which could be stored and used in a space in our shed. However, on occasion, especially over the Winter, we wished we could bring the layout in and play trains in the warmth of the house. This was not easy. Plus the layout being in the shed is easily damaged.

Around Christmas time Hornby posted a YouTube video from YouTuber/Railway Modeller SDJR7F88 made a tutorial video on how to make a festive model railway in a plastic storage box.

This gave us the inspiration to do something similar but on a slightly larger version. Being able to store the layout in a box would make it easy to transport, and bring in the house, and lower the risk of damage.

We decided on buying a Christmas Wrapping paper box from Wilkinsons. The internal measurement would allow a 3ft x 1ft layout, just about large enough to make a small shunting puzzle layout for us to use.

We wanted to make sure the layout would be light enough for us to move around easily so asked Justin at ScaleModelScenery.co.uk to make us a custom baseboard that would fit perfectly in the box.

As usual, the baseboard was cut and posted super quick and arrived as promised. They were very easy to build and went together fantastically well.

The next part was the nervous test to see that I had measured correctly and that the baseboard would fit in the storage box or not?

Phew! It fits! Thankfully it was a perfect fit. In fact, it fitted much better than I imagined as I thought I had allowed a space around which would let it slide about, but it does not move at all.

Next stage was to roughly lay out the track that we had planned to ensure that it would work? Obviously, with very limited space we didn’t want to be too ambitious but also get enough track to make it interesting.

Next thing was to fix the cork to the baseboard and cut to size. The whole board was then put to one side to allow the glue to dry and track laying can begin next week. 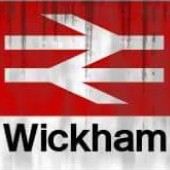 I am a middle-aged Railway enthusiast. I have a teenage Son who shares the enthusiasm. We love micro layouts and have a couple of layouts that we take to local exhibitions. We are not master modellers but don't do too bad. My modelling knowledge has been gained from being a member of our local Model Railway Club, Wisbech Model Railway Club. Loving the hobby and all the wonderful things that can be achieved.

More Recycling Ideas For Scenic Ideas For Your Layout – Part 2